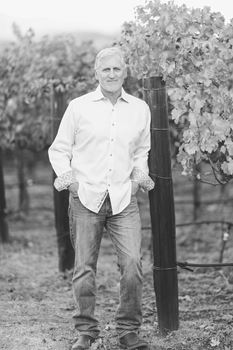 A third-generation grapegrower, Rich learned the art of farming on the family ranch from his father and grandfather. He completed his degree in viticulture from Fresno State University in 1987. He worked multiple positions in the wine industry, including stints at Mumm Napa Valley, S. Anderson Winery, Jaeger Vineyards and California Grapevine Nursery.

He continued to help farm the family vineyards and expanded the family's grape growing business to include winemaking. The inaugural vintage of Salvestrin Cabernet Sauvignon was in 1994, and in 2001 the estate winery was constructed among the family vines.

Winemaking Philosophy:
Rich believes in making wines that tell part of the story of the grape growing lifestyle in the Napa Valley, and wines that are enjoyable expressions of what we do on a daily basis. It's all about balance: balance in our lives, in ourselves and in our wines. He strives to make wines that we can enjoy and that will go well with food. 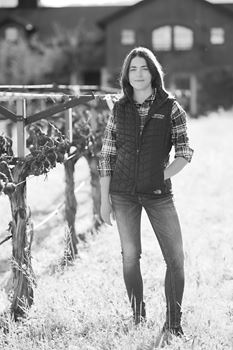 Natalie’s enthusiasm for viticulture and winemaking began in an inconspicuous way. She landed a gig at a local wine bar while attending the University of Oregon. Immediately smitten by the variety of profiles from wines grown all over the globe, the sommelier path seemed the logical trajectory. A friend and mentor at the time suggested working a harvest abroad. Recently graduated, fluent in Spanish, and ready for adventure, Natalie jumped on a plane to Spain in 2009 for vintage at Bodega Elias Mora in Toro. Once she had dirty vineyard boots and purple hands, suddenly her future became very clear.

After her stint in Spain, she moved to Healdsburg, California to pursue a winegrowing career. She’s worked at a variety of wineries in both winemaking and viticulture: Windsor Oaks (Russian River Valley), Mill Creek Winery (Dry Creek Valley), Westwood (Sonoma), and Salvestrin (St. Helena). In 2013, she travelled to Victoria, Australia for harvest at Delatite Winery. In 2015, Natalie travelled to Bordeaux, France for vintage at Chateau Fontenil, where Dany and Michel Rolland celebrated their 30th harvest at the winery. Natalie has been privileged to learn from renowned winemakers David Ramey and Dany Rolland.

She holds a Bachelor of Arts in Spanish and Political Science (University of Oregon) and a Master’s in Viticulture and Enology from the University of Valladolid in Ribera del Duero, Spain.
Natalie is very keen on farming as the key to quality winemaking and focuses her efforts in the vineyard to transitioning toward organic and biodynamic methods.

Winemaking Philosophy:
Always seeking balance and focusing efforts in the vineyard through the growing season. Let the vineyard speak for itself in the wines, a winemaker's impression should be minimal.