For the first time, PEJU is offering up a wine specifically from their estate Orchard Vineyard in the Oak Knoll District of Napa Valley nested appellation. This 3.8-acre parcel was planted to 100% Cabernet Sauvignon in 2016. Aging for 18 months in 100% new French oak, the expression of dark, dense fruit and overall “yum factor” is exceptional. 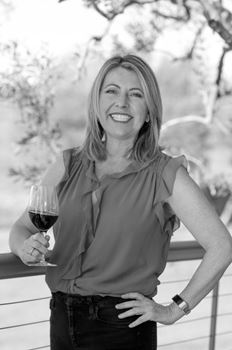 Sara Fowler has been named Best Local Winemaker by Napa Valley Life Magazine in 2016, 2017 and 2018. She was raised on a 400-acre organic ranch in Kelseyville, where she grew up familiar with all of the nuances of farming, from driving a tractor at age 12 to brewing beer with her father and taking their pears to be made into brandy. One hallmark story of her childhood was the Christmas gift of copper wire and the components to put together a radio, rather than the Barbie doll she had requested. She and her family grew almost everything they ate, so from a young age she understood the principles of farm to table food and cooking.
She initially thought her life and career would focus on being an artist, but after she began working harvests and summers at Kendall-Jackson, she pivoted to studying viticulture at Fresno State and becoming a winemaker. Along the way she spent a year living on a sailboat in Mexico, which fed her drive to have adventures and see the world.
When she arrived at Peju in 2006 her first mission was to transition the estate vineyard into being organically farmed, which was accomplished in September 2007. This was a natural and fulfilling process for her, given her childhood setting on an organic property.
Sara has worked for several other Napa wineries and traveled and spoken widely not only on behalf of the Napa Valley winery community but also the Rutherford appellation as a Board member of the Rutherford Dust Society. She often serves as a wine judge, and regularly welcomes winemakers and coopers to taste wines with her at the winery. In fact, that is the origin of one of Peju’s most distinguished wines, The Experiment: over the years she blended Cabernet Sauvignon using a vast and diverse range of barrels and would accumulate feedback from colleagues, who enjoy tasting the same wine across many different barrels.
During her tenure to date at Peju she has grown the number of wines being made and today supervises the farming of the winery’s 204 acres of six estate vineyards in four different sub-AVAs of the Napa Valley. “My goal is to constantly improve the quality and focus of what we’re doing,” she comments. Sara also supports the winery’s green initiatives in the vineyards and the winery, in conjunction with Ariana Peju (who installed an array of 720 solar panels which supply 36% of the winery’s energy). Today she is directing the transition to sustainable farming in all of the estate vineyards. In addition, Sara appreciates the creative license she’s given to fine-tune vineyard practices as well as develop new approaches to blends.
When not at the winery, Sara loves salsa and swing dancing, drinking bubbles and is known as a great cook, perhaps most famous for her chilaquiles. “I love to feed people,” she says. She’s also an avid reader and the mom of two grown sons.

Winemaking Philosophy:
Known throughout the Napa Valley as a master blender, Sara has brought along a wealth of knowledge and creativity into the cellar since joining Peju in 2006. Sara's passion for Bordeaux varietals and knack for innovative blending make her the perfect fit to lead Peju's winemaking team. Her artisic approach towards crafting wine focuses on taking the best components from the Peju estate vineyards and blending them to create the finest possible finished product.

In September 2007, Sara headed Peju's efforts to gain organic certification in the Rutherford Vineyard and she is overseeing the winery's sustainable farming efforts in the Persephone and Wappo Vineyards with organic certification goals in the near future. This method of grape farming not only preserves the land and creates balance in the vineyard, but it also enhances the quality of the fruit.