'The Centennial' Beckstoffer To Kalon Vineyard

Your wine celebrates a century among the vines between Andy Beckstoffer, To Kalon and Tor Kenward. It is a wine that was 100 years in the making. In 1969, Andy Beckstoffer arrived in Napa, Tor Kenward in 1977. Both sought careers as vintners and became leaders in Napa Valley’s formative years. This year marks their combined 100-year journey though Napa Valley’s history. Some call them icons and leaders; they prefer the title “friends.” Relationships. They are what make a great wine. Location, experience and hard work can give it shape and make great art, but the relationships between man and earth, man and man are what build the foundation of a great wine. Andy Beckstoffer and Tor Kenward have formed a strong bond over their combined 100 years of working with the simple goal of putting Napa Valley wine among the very best in the world. The Centennial is one of those wines.

Jeff Ames moved to the Napa Valley in 1999 and shortly thereafter began working as assistant winemaker to Thomas Brown on projects including Schrader, Maybach and TOR. In 2003, he took over as head winemaker at TOR, and in 2005 founded his own brand, Rudius Wines.

Winemaking Philosophy:
To let the vineyards fully express themselves and to completely utilize the best qualities of the fruit in a particular vintage.

Tor Kenward is the proprietor of TOR Kenward Family Wines and Vineyards in Napa Valley, California, and a consultant to several high profile California wineries.

In 2001, Tor retired as Vice President/Winery Spokesman of Beringer Wine Estates after two decades on its multi-winery executive committee, to launch TOR Kenward Family Wines. From 1977 to 2001 he was very influential in shaping Beringer's highly acclaimed Reserve wine programs. The Beringer 1986 Reserve Cabernet Sauvignon and the 1996 Reserve Chardonnay were both honored Wine of the Year in the Wine Spectator.

Beringer acquired many leading California wineries (Stags Leap, Etude, Souverain, Chateau St. Jean, among others), built the Meridian and Maison Deutz brands from the ground up, and managed a diverse, successful import division, while Tor served as Vice-President. Regular visits to Europe's great wine growing regions and wineries through the 80s and 90s inspired Tor's plans for each of these California wineries wine and food educational programs.

In 1987, Tor and internationally known chef and teacher Madeleine Kamman mapped out the foundation for the School for American Chefs at Beringer. For over a decade, the program taught many leading chefs that are working today. Julia Child asked Tor to serve on the national board for The American Institute of Wine and Food and Copia: The American Center for Wine, Food and the Arts. He served for a decade on each of these boards. 1995 - 1997 Tor served as AIWF's National Auction Chairman for their annual Rare Wine Auction, and chaired their tribute auction dinner celebrating Julia Child's 70th Birthday Party in Washington, DC.

Tor was on the first steering committee for the Napa Valley Wine Auction (currently the world's most successful wine auction) and the first Premier Napa Valley Wine Auction (currently the world's leading trade wine auction). Through the 80s and 90s Tor served on numerous other local and national wine and food boards and steering committees. He was often quoted in leading wine publications representing the wine industry, was interviewed on the Today Show, CNN, and was the industry spokesperson on 60 Minutes anniversary segment on the French Paradox.

TOR Kenward Family Wines are small production, terroir driven, single vineyard Cabernet Sauvignons, Chardonnays and a limited line of Rhone varietals under another label, ROCK. The wines since inception have received the highest praise and scores from the leading wine critics. Robert Parker said early on, "Having known Tor for over 15 years, I know that he is the consummate connoisseur of many things, including music, wine, and food, so it is not surprising he is able to translate his passion and discriminating taste into an impressive portfolio of wines." 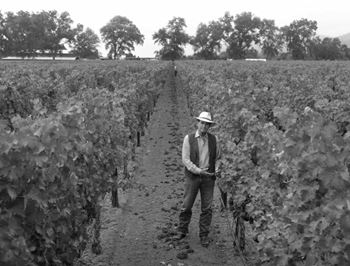 Andy Beckstoffer is one of the early and most important leaders in the evolution of the Napa Valley to a world class grape growing region. A native of Richmond, Virginia and Graduate of Amos Tuck School at Dartmouth, Andy joined Heublein, Inc. in 1966 and played a critical role in advising the company to enter the super-premium wine segment of the California wine industry, including its purchase of Beaulieu Vineyards and United Vintners, owners of Inglenook and Italian Swiss Colony wines.

Andy has made a notable contribution to the overall quality and perception of Northern California grape growing. In 1989, he led the Napa Valley Grape Growers in establishing the Winery Definition Ordinance, which requires that 75% of grapes used in Napa Valley wines must come from the appellation. And, in 1994, as founder and first president of the Rutherford Dust Society, Andy encouraged and promoted the highest quality standards in grape growing and winemaking in the Rutherford Viticultural Area.

Andy lives in the Napa Valley with his wife Betty, to whom he has been married for over 50 years. In 2000, Andy and Betty were named Citizens of the Year for their dedication and active participation in the community. And, in 2010, Andy was elected into the Culinary Institute of America’s Vintners Hall of Fame, the first grower to be honored with this prestigious wine industry award.